A series of moderate earthquakes shook the region of Nafpaktos, central Greece, on Wednesday.

The first tremor — of the magnitude of 4.4 on the Richter scale — rocked the region shortly after midnight, the National Observatory of Athens reported.

The epicenter was 32 kilometers (20 miles) from the city of Patras. The quake occurred about 4 kilometers (2.5 miles) deep into the earth near Nafpaktos. No casualties or injuries were reported.

According to the European Mediterranean Seismologic Centre, the earthquake had a magnitude of 5.1 on the Richter scale.

A second 4.3 magnitude earthquake hit the same region, shortly afterwards, followed by another temblor of a magnitude of 4.2 just before midday. The latest quake occurred about 11.5 kilometers (7 miles) deep into the earth. 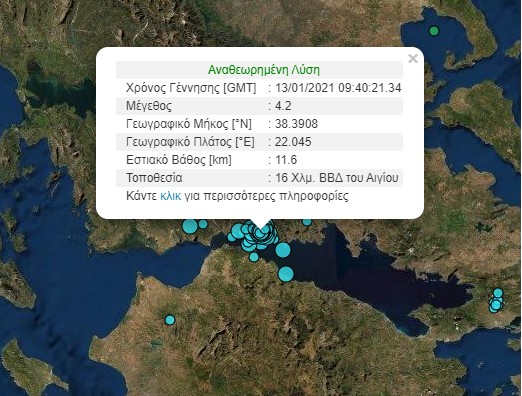 Speaking to CNN Greece, head of Earthquake Planning and Protection Authority Efthimios Lekkas appeared to reassure the public about the seismic activity in the area.

Lekkas stressed that the seismic activity in the area is a “normal phenomenon,” and underscored that the fault lines there do not cause earthquakes over 5 on the Richter scale.

Earthquakes are common in Greece, since the country is located at the complex boundary zone in the eastern Mediterranean between the African Plate and the Eurasian Plate.

In late October 2020, 19 Greek citizens were injured and two teenagers killed from an earthquake that hit between the Greek island of Samos and the Turkish coast.

The earthquake injured an additional 1,034 and killed 116 people in the coastal city Izmir, Turkey.