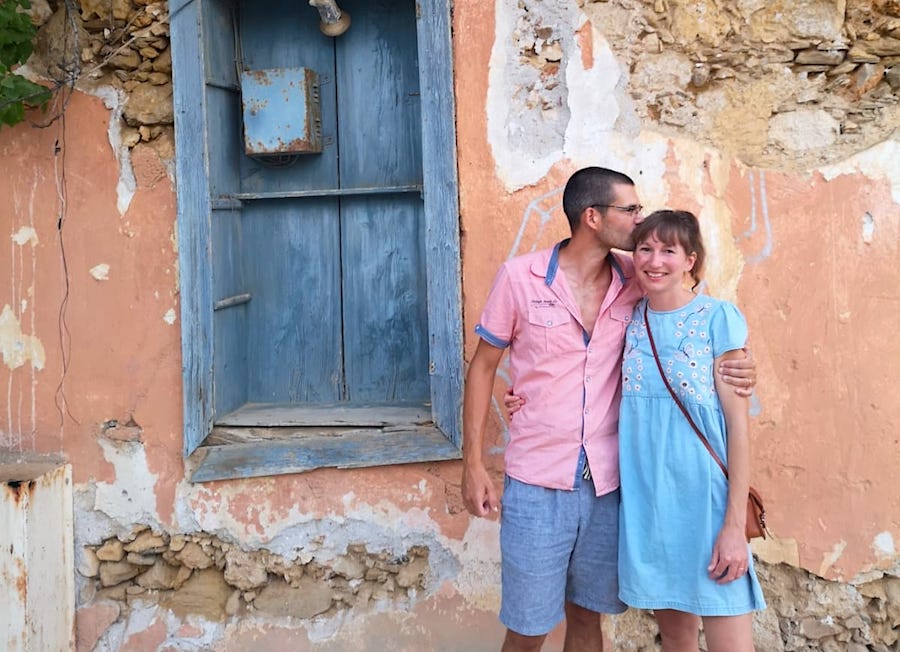 Part of me wishes I was Greek. Nothing excites me more, than the thought that one day I’ll be able to speak the language fluently and make myself understood. The beautiful, complicated words frustrate but excite me, and every time I understand something, it’s a small victory.

At the age of thirty, I’m finally here and it feels like this is where I belong.

Greece has always held a special place in my heart. Sun soaked family holidays on the Greek islands were filled with laughter, stuffed tomatoes and and peeking through the keyholes of dilapidated ruins.

In Skiathos we befriended a donkey, in Corfu we were gifted with eggs and wine, and in Samos we took a local bus to the beach and gorged on watermelon after an afternoon of snorkelling.

When I first met my husband to be, our love for Greece was a shared passion. Having spent a year in Crete at the age of eighteen, he nostalgically spoke of that long hot summer where he sped around on his moped without a helmet, scuba dived and ate pita gyros’s at midnight. “I’ve got to take you to Crete, there’s something special about that place.” He told me.

Those happy times were quite a contrast from the life we were living in the South East of England, which involved a repetitive sequence of working, eating, sleeping and watching television. The forecast for the future looked to involve doing the same for the next forty years, and it didn’t look very inviting. We were being swept along with the feeing that we had no other choice, our destiny was predetermined. We felt disillusioned; something was out of balance. In response, we bought material possessions, spent money and watched programmes about people that had left it all behind.

As we reflected, we recognised that in lots of respects, our English life was making us feel unhappy. What we really wanted from our lives was more time, freedom and a simpler existence. Additionally we wanted to live an outdoors lifestyle rather than being cooped up indoors.

Our mission to free ourselves led us to back to Greece; the country that seemed to have it sussed out, the place where we felt happy. We dreamed, discussed and analysed every detail, until one day, we took the plunge and waved goodbye to the UK. We stood excitedly on the threshold of our new life in Greece, hoping we’d made the right decision.

So have we found what we were looking for? Has Greece provided the answers? It’s a resounding yes.

Nowadays we are living the life we used to dream of, and feel aligned with our ideals. Greece has allowed us to be our true selves. The balance has been restored and we have a sense of control over our destiny.

Pouring our own olive oil over a homegrown salad, waking up at sunrise to let out our chickens, and swapping eggs for grapefruits have become our reality. There’s always time to soak up the sun, swim in the turquoise waters and sit with a glass of wine on the terrace. As the sky turns from orange to pink, we pinch ourselves whilst swatting away mosquitos.

But this lifestyle was never just about the sunny weather and beautiful beaches. It’s the people, language and history that also drew us here.

Since moving to Crete we’re gradually integrating ourselves into an island of people that are fiercely passionate about their customs and traditions. We’re beginning to speak their language, learn about the history of this ancient culture, pick wild edible greens, and drink frappe cappuccinos by the dozen.

In our village people are still living a traditional lifestyle. Everyone owns land and produces their own food. They are teaching us the old ways of growing and preserving. By moving to Greece we’re rebelling against this modern, fast paced world that has no time for us.

The other week we were talking to the lady at the village shop. She pulled up a couple of chairs, made us a Greek coffee and we sat opposite the till chatting in a mixture of Greek and English. As we left to walk back home, she ran out to give us an artichoke. I cast my mind back to our old lives, and realised that we are richer than we ever were in the UK. We’re rich in kind neighbours, delicious food, but most of all we’re rich in time.

As the well known Greek philosopher Socrates once said: ”The secret of happiness, you see, is not found in seeking more, but in developing the capacity to enjoy less.” I think he summed it up in that sentence; maybe being from Greece gave him the upper hand. It turns out that Socrates and my husband were both right; a simple lifestyle does bring you happiness, and there really is something special about the island of Crete.

*Stephanie and Matt Trott moved to a cottage near Panormos, in the region of Rethymnon, in August of 2018. The pair maintain a blog named sidestepping-normal.com, in which they record their lives on Crete.